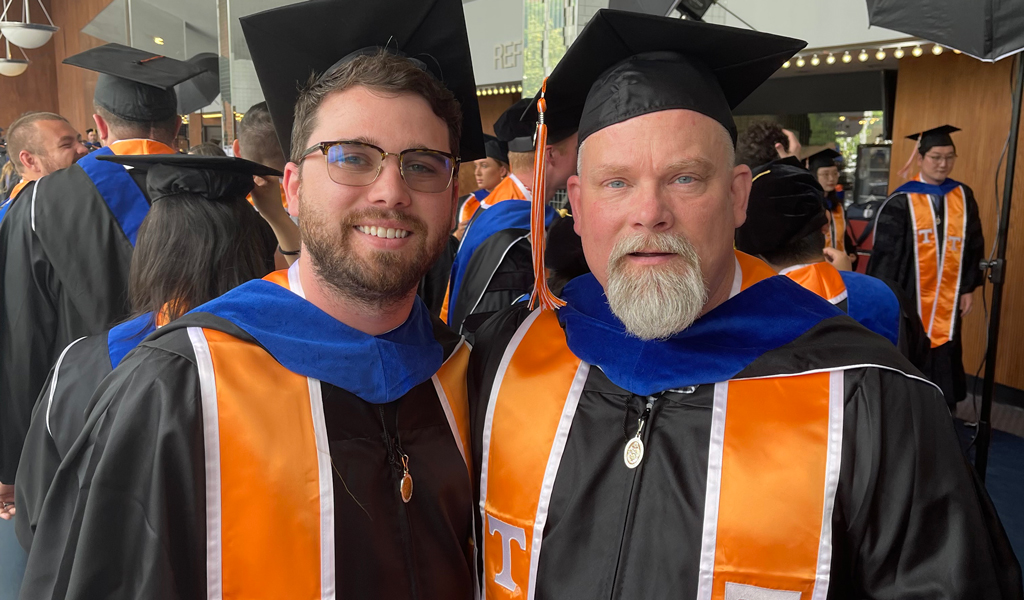 Like so many parents with children in college, John Knox was fascinated to hear about his son’s studies in an unfamiliar field: supply chain management.

“He would talk to me about what was going on in his classes and how motivated and excited he was to get into supply chain,” John says. “He talked a lot about the analytics part of it, which I can relate to.”

A software designer and data analyst at the Helen Ross McNabb Center for over a decade, John had thought about furthering his education for a long time. Obtaining a master’s in supply chain management had never occurred to him, until Colby’s passion opened his eyes to its possibilities.

“I could really see how it translates to what he does,” Colby says. “Supply chain has become more diverse than it’s ever been. It’s not just one or two subjects. Supply chain people end up in finance and senior management. The opportunities are kind of endless.”

For Colby, pursuing a master’s degree at the University of Tennessee in supply chain management was never in question. Born and raised in Knoxville, he began a career at Averitt Express working in logistics straight out of high school. When he decided to get a degree in the field, location and prestige aligned perfectly.

“UT has a really great, world-class program; I knew that going into my undergraduate degree,” Colby says. “I knew I was going to get my master’s eventually, and when I graduated, I thought, ‘Why not now?’”

Colby had already accepted a job with Mercedes in Tuscaloosa, Alabama, but with UT Knoxville’s Master of Science in Supply Chain Management Online, the distance was no problem. He could continue the relationships he built with professors leading the field while earning an income. And he made it sound so good that his dad, John, joined him for the same degree in the spring of 2020.

“He was a good ambassador for the program,” John laughs.

Despite being an IT professional, John admits that he was a little intimidated by the online format at first.

“I had no idea what to expect,” he says. “But the way they laid out how you go through the class is an easy transition from learning in class to online. You have peer-to-peer interaction and interaction with the professor in Zoom classes. And you can post ideas in the community setting on Canvas.”

Colby was a little skeptical about transitioning from a rigorous in-person undergraduate schedule to online as well, but he soon found striking similarities to the structure.

“In undergrad you’re leading up to a capstone project encompassing everything you’ve learned. With this program each class leads up to the next, and you use things that you learned in the previous class.”

Despite his lack of background in supply chain management, John found he didn’t need to lean on Colby at all. Many classmates had a similarly limited supply chain education, but the program structure meant everyone absorbed the material at their own pace. Colby says there were definite benefits about going through the master’s program together, however.

“Doing it together helped us stay motivated. Having someone to motivate you, whether it’s your dad or a friend is a real advantage,” Colby says.

The Knoxes also found the connections they made in the program helped them look at their own industries differently. While for John this means anticipating the innovations and disruptions in the software industry over the next five years, Colby found colleagues in the automotive industry that he can continue to bounce ideas off. Despite their different fields, the Knoxes agree that their most valuable class was supply chain finance.

“It was really hard, but I enjoyed it,” John says. “When you look at ROI or some of the other financial metrics, those tend to be the same across business areas and even between nonprofit and for-profit.”

“You can’t know too much when it comes to finances,” Colby agrees. “It doesn’t matter how large the organization is, improvement in finances, cost reduction and continuous improvement are all a part of supply chain management. The financial aspect of it all is what for me ties everything together.”

They cannot agree, however, on a favorite professor, each naming a handful until they discover they covered most of their classes. To both, the access to so many with industry experience brings the material to life. They admit that going through the program together has ignited a fair bit of friendly debate in the family.

“We didn’t really compete against each other grade-wise,” John says. “He says it wasn’t a competition because he knows if it was, I won,” Colby laughs. “It’s been great to be able to dig into his experience and understand the analytical side of what he does, though. Overall, it’s just been awesome to go through the program with my dad.”

“Things came together at the right time, and it’s really been great,” John agrees.